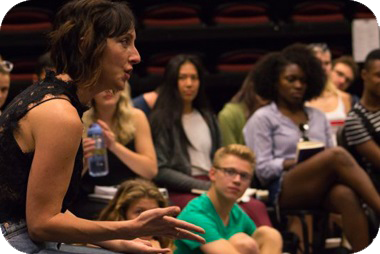 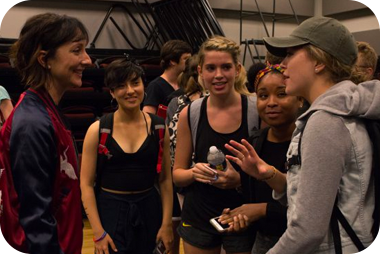 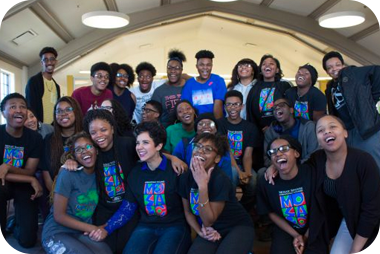 As part of its overall mission, Cabaret 313 has established- a goal to foster the growth of the cabaret art form through educational programming and master classes with the artists it presents. Since 2014, the institution has collaborated with Wayne State University’s Department of Music, University of Michigan School of Music, Theatre and Dance, and Detroit’s Mosaic Youth Theatre to present influential and life-changing sessions. Cabaret 313’s 2019-20 season featured three master class instructors: Joshua Henry, Sierra Boggess, and Christine Andreas.

“It was just FABULOUS! What a wonderful talent. Finding this quality entertainment is a talent in itself. Keep up the good work!”

“Hello, my name is Naomi and a few months ago I was able to attend Alexandra Silber’s musical master class as a participant of Mosaic Youth Theatre of Detroit. I personally have a passion for musical theater and hope to one day pursue it as a career. Before this class, I saw musical theater as something fun that could ever so often make you feel something but it never truly carried any emotional weight, at least for me. Seeing my peers perform their hearts out while being coached on how to connect with the pieces they choose was an eye-opener, at one point I was almost moved to tears because of how powerful their performances were. Thanks to Miss Silber I now see musical theater as more than just something fun that could at times tug at the heart strings, now I see it for it has the potential to be when I put my all into it.”

“This Alexandra Silber master class was a great experience for me because it gave me a more in depth explanation of music and its power. During the session we were taught that each song has a different message and each person has a different way of telling it. Therefore you must make the song your own and put yourself in the writer’s shoes in order to fully understand the purpose of the song. The class also taught me that music has the power to inspire and change lives. That every song has a backstory and there’s a reason that the song was written.”
- Kristianna, 9th Grade

“Attending the Cabaret 313 Master class taught by Alexandra Silber was a life-changing experience for me as a performing artist. Although I didn’t perform, I was still challenged to think critically about the selections the other young artists performed. This Master class gave me a tremendous amount of theatrical technique that I could see myself actually implementing into my own musical selections, in addition to helping other individuals use those techniques as well. Following the Master class, I reflected on the experience and ultimately realized as a performer, the thing that matters most is engaging my audience and telling a story. The story should be conveyed in a way that will not only keep your audience engaged, but also impact them in a way where they feel capable of accomplishing anything they put their mind to. I would be highly interested in attending another Master class and implementing the skills that I have retained from such a knowledgeable professional along with my training that I am currently receiving at Mosaic Youth Theatre of Detroit.”

“I’m so glad I was able to stay for Sierra’s master class this afternoon at Mosaic Youth Theatre (a performing arts program for inner-city Detroit Public Schools students), which I think I actually enjoyed more than last night’s shows.

If you’re not familiar, here’s how a master class works: A student performs a portion of a song (like an audition), Sierra offers advice and critiques, and then the student performs it again.

The highlights of her advice (which also, as it turns out, are applicable to writing):

*Your performance will always be better the more specific you can make the context of the song you’re singing. So, for instance, imagining the specific person and moment when you were told you’d never make it to Broadway rather than singing to a crowd of “haters.” Sierra talked about the importance of taking songs out of the context of the show they’re performed in and personalizing them with your story (ex. “Whispering” from “Spring Awakening,” which one girl imagined she was singing to her mother who didn’t accept her lesbian identity).

*One student performed Cole Porter’s “Were Thine That Special Face” from “Kiss Me, Kate.” He and Sierra talked afterward, and he envisioned the song as a chance meeting between two cars in a high-school parking lot, sung from the point of view of a guy who loves a girl he never expected to meet there, and he’s singing words he’s thought for forever but is saying out loud for the first time. His second performance was noticeably more emotional and vulnerable. As Sierra said, “You weren’t acting out a conquest that time, you were achieving it.”

*It’s rare for a stellar writer to be able to break down their process and explain exactly how they do what they do  (see: the curse of knowledge — you’re so good at something that you can’t step back and explain how the magic happens), and I assume the same is true for elite performers. But Sierra is that rare performer who can expertly guide others to a personal understanding of where the song is coming from and how they can allow their audience to both feel the singer’s personal journey and appropriate it to reflect their own stories (As she told one performer, “You’re having the experience, but allowing us to have the experience with you”).

Many, many tears were shed by students who tapped into moments they didn’t anticipate sharing or maybe even thinking about — and by those who listened to the outpourings — and the Cabaret 313 assistant I was attending with said it was the most emotional master class they’d ever hosted. Now I’m curious to see other performers do these, as this one is currently my only point of reference.

In short, the afternoon was a fascinating window into an experience public doesn’t normally get to see, and which I hadn’t previously been exposed to (as I don’t have a performing arts background and am not a singer or dancer).  It surprised me that Sierra didn’t critique any of the technical aspects of the performances, but rather helped the students understand and crystallize the places they were singing from to elicit the most powerful renditions.

Finally, something she said that’s valuable to remember, whether in writing or acting: The only person you’re competing against is yourself. When you’re preparing for an audition (or, in my case, drafting an article), you’re wrestling with yourself to produce the best piece or performance possible. For these students, that involved being brave and tapping into moments and memories that they’d rather gloss over or bury. Those were the stories Sierra teased out and encouraged the students not only to sing from, but embody in every moment of their chosen pieces.”

“Those kids were hanging on every word from Sierra. She brought SO much out of each kid, was totally relatable….Bill and I were SO glad we were there. It was a powerful experience…

Sierra was able to pull things out of each singer – WHY did they choose that song? What did it mean to them….who were they singing it to?

One girl, Zoe, was an absolute knockout. The exchange with Sierra brought me to tears, too. Like I said: POWERFUL.

The tears of those kids were heartfelt….”

As Executive Producer of “Detroit Performs,” a weekly arts series on WTVS Detroit Public Television, I’m pleased to recommend Cabaret 313 and its series of master classes with young artists. In May of 2018, we produced a TV segment following Broadway star Alexandra Silber as she gave a master class with singers and actors from Detroit’s Mosaic Youth Theatre. What you see in the eight-minute video is nothing short of awe-inspiring. Ms. Silber encourages them to be “brave enough to be vulnerable” and their performances are truly moving. Documenting this type of mentorship and collaboration is a key mission for “Detroit Performs” and we’re grateful to Cabaret 313 for making it happen. As people are able to watch this video online, this story lives on to inspire others and, I believe, helps change the narrative about Detroit as it showcases the amazing talents of our city’s young artists. On a personal level as an amateur musician, I’ve attended many of these master classes and have always learned something new. I’m a stronger performer today thanks to Cabaret 313. I hope that you will support Cabaret 313 and its ongoing work to connect successful professionals with rising stars.